Dormancy and Viability Of Seeds 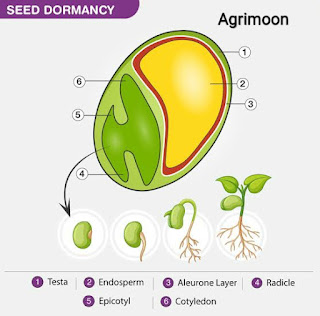 Dormancy is the state of rest period of a seed in which it does not germinate or it is a state of inhibited growth of seed or other plant organs as a result of internal causes.

Kinds of Dormancy in Seeds
The dormancy of the seeds may be classified according to their occurrence in seeds and there may be; (1) primary dormancy, (2) secondary dormancy, and (3) special type of dormancy. These kinds of dormancy in seeds may be explained as under:
(1) Primary Dormancy: The seeds which are incapable of germination just after ripening even by providing all the favourable conditions which are necessary for germination, are said to have primary dormancy, for example potato, onion etc.
(2) Secondary Dormancy: Some seeds are capable of germination under favourable conditions just after ripening but when these seeds are stored under unfavourable conditions even for few days, they become incapable of germination, such type of dormancy is termed as secondary dormancy. (3) Special Type of Dormancy: Special type of dormancy is seen when seeds germinate but the growth of the sprouts is found to be restricted because of a very poor development of roots and coleoptiles.
Causes of Dormancy
The causes of dormancy are: (1) dormant embryo, (2) hard seed coal, (3) seed coats being impermeable to water, (4) seed coats being impermeable to oxygen, (5)synthesis and accumulation of germination inhibitors in the seeds, and (6) undeveloped embryo of seeds. The dormancy in seeds may be due to any single cause of combination of more than one of the above cited causes, In general the causes of dormancy are discussed here as under:
(1) Dormant Embryo: The seeds of peach, pinus, apple, apricot etc. do not germinate even though the embryos are completely developed and all the favourable conditions for germination are provided. In some seeds some physiological changes called “after ripening” take place during the period of dormancy which enables the seeds to germinate.
(2) Hard Seed Coat: The seed coat of okra, muştard, amaranthus etc. fails to burst the embryo and remain dormant even after providing all the favourable conditions for germination, because such seeds contain a hard and strong seed coat which prevents any appreciable expansion of embryo. Therefore, any treatment, which may bring about changes in cell walls of seed coat by which the seed coat becomes soft, will help in breaking the dormancy.
(3) Seed Coats Being Impermeable to Water: Some seeds like cotton, even when fully matured and placed in favourable conditions fail to germinate because of failure of water penetration into the hard seed coats, as these seeds have a seed coat which is impermeable to water. These seeds become permeable if they are dipped in boiling water or treated with sulphuric acid for few seconds.
(4) Seed Coats Being Impermeable to Oxygen: Some seeds like Xanthium have seed coats which are impermeable to oxygen and if the seed coats do not rupture the seed fail to sprout. The permeability increases slowly by keeping seeds under dry storage conditions. Thus, the dormancy is automatically broken. (5) Synthesis and Accumulation of Germination Inhibitors in the Seeds: Plant organs synthesis some chemical compounds which are accumulated in the seeds at maturity and these chemicals inhibit the germination of their seeds e.g. tomato seeds fail to germinate if they are treated with their fruit juice, similarly some seeds contain germination inhibitors in them.
(6)Undeveloped Embryo of Seeds: The seeds of many orchids which are actually ripened contain a rudimentary or incorrectly developed embryo and the germination of such seeds naturally gets delayed until the embryo develops properly.
Methods to Break the Dormancy of Seeds There are four methods used for breaking the dormancy of seeds, viz. (1) temperature treatment, (2) application of pressure to seeds, (3) scarification, and (4) exposure of seeds to light, all such methods are explained as under: (1) Temperature Treatment: The dormancy due to physiological changes in embryo or due to after ripening may be broken by different temperature treatments. The temperature treatment of seeds hastens the physiological changes that result in after ripening. This is mostly applicable when dormaney is inherent in the embryo.
(2) Application of Pressure to Seeds: Germination of some seeds like Medicago sativa is found to be increased from 50 to 200% when a hydraulic pressure of 2000 atmosphere at 18°C is applied. The probable reason for higher germination may be an increase in permeability of seed-coat to water and oxygen.
(3) Scarification: The dormancy due to hard seed coat or impermeable seed coats can be broken by scarification of seed coats. The scarification should be done in such a way that the embryo is not injured. Sometimes mineral acids like H,SO4, HCI, etc. are also used for scarification.
(4) Exposure of Seeds to Light: The light has an effect on hastening the germinability of seeds of some species viz. Vernonica longifolia. Thus, the exposure of seeds to light helps in breaking the dormancy.
Viability of Seeds 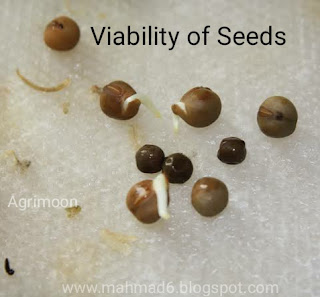 The seed which are alive and can germinate into a healthy sprout when provided with favourable conditions. Sometimes they may be dormant and require special treatment to break dormancy for initiating germination.
Seed viability is defined as the capacity of the seed to remain capable of germination for some specific period of the time.
Viability Test of Seeds
In Indian seed programe, during harvesting period a very large quantity of seeds is usually procured in the shortest possible time, where it becomes necessary to decide immediately whether or not a particular seed lot is to be purchased. This necessitates a rapid test to find out whether the seeds are viable and under favourable conditions they may germinate or not. When the seeds are dormant or very slow in germination, the viability test is extremely useful. The various methods for rapid viability test of seeds are; (1) Potassium permanganate test, (2) Biochemical test, (3) Indigocarmine test, (4) Electrical conductance test, (5) Respiration test and (6) Embryo culture test. All these tests are discussed below:
(1) Potassium Permanganate Test: Due to the fact that; the dead cells become freely permeable to their contained solutes which leach out easily into bathing solution, whereas leaching from living cells is very less, therefore, solution of potassium permanganate is used to find out the percentage of dead seeds in a seed-lot. In this method the seeds are soaked in a weak solution of potassium permanganate and as the proportion of dead seed increases the discolouration of the solution also increases Thus, extent of discolouration indicates the proportion of dead into a seed-lot.
(2) Biochemical Test: In this test tetrazolium chloride is used test. The fact of this test is that the salt is an oxidation-reduction indicator and the development of non-diffusible red colour is most probably an indication of the presence of active respiratory process in which hydrogen ions are transferred to tetrazolium chloride causing reduction. The test is conducted as given below:
(i) The seeds to be tested are soaked in 0.5 to 2% solution of tetrazolium chloride.
(ii) The viable or living seeds take bright red colouration becomes more intense in the embryo while the dead seeds remain in their original colour.
(iii) The colourless tetrazolium chloride forms carmine red formazan after reacting with H” ions upon reduction.
(iv) The method is made quicker by cutting kernels, using vacuum and maintaining a temperature of 40 to 45°C. By doing so it takes only 4 to 5 minutes time to complete a test of 100 kernels.
(v) The method is used as a guide in blending seeds and their lots under an urgent demand for seed.
Since the above cited test has given a high degree of perfection and because of this fact the ISTA rules now recommended for the use of this test for detecting the viability in a number of plant species, the seeds of which have a very pronounced and long lasting dormancy.
(3) Indigocarmine Test: It is practical that the dead seeds or their cells are stained when soaked in the solution of any aniline dyes such as indigocarmine for few hours. Therefore, the fraction of dead and viable seeds can be determined by counting the number of stained and unstained seeds respectively.
(4) Electrical Conductance Test: The phenomenon behind this test is that; there is increase in the conductivity of bathing solution due to leaching of metabolites from dead seeds. The seeds are soaked in distilled water and the electrical conductance of the bathing solution is tested, the increase in conductance is roughly proportion to the percentage of dead tissues.
(5) Respiration Test: Since respiration is an indication of life, as such respiration test is used to determine the viability of seeds. The respiration tests are difficult and not worth believing because the resting or dormant seeds show very low respiration and the micro-organisms growing on seeds may show respiration when seeds themselves are all dead.
(6) Embryo Culture Test: The embryo culture test takes about 7 to 10 days to give the viability percentage of the seeds. This practical is conducted in below mentioned 3 steps :
(i) The embryo is removed carefully from its cotyledons or endosperm.
(ii) It is placed naked on granulated peat mass or on sterilized nutrient agar medium (White’s nutrient medium).
(iii) The viability is judged by counting the number of germinated embryos. The phenomenon behind the aforesaid method is that; the viable seeds will germinate and non- viable will fail to do so.
SHARE