Please use the login form to sign in and view your tasks.
Pathology 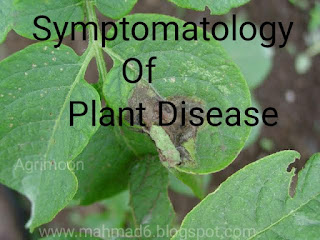 Symptoms of a disease are the visible effect which the pathogen induces on the host plant. In other words, we can say that visible abnormalities in structure or function observed on the host plant as a result of disease are called symptoms. Leaf spots, leaf blights, mosaic, leaf curl and damping off are symptoms of specific descriptions. The sign of a disease is the external appearance of some part or portion of the pathogen on the host. It may be some portion of mycelium or spore of the pathogen or some spore stage. Rusts, smuts and cottony growth of the mycelium in downy mildews are typical examples of the signs.
Most of the plant pathologists do not make any distinction between signs and symptoms. They define that visible external signs of all descriptions seen on the host plant as a result of disease are called symptoms.
These symptomatological manifestations (signs and symptoms) which furnish clues for the diagnosis of plant diseases are being described in some detail.
(A) Symptoms as vegetative or reproductive structures of pathogen on host plant.
(i) Mildews. 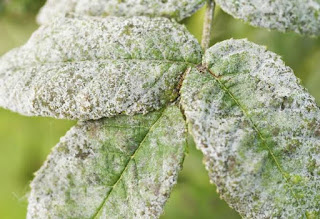 Superficial growth of mycelium on leaves is called downy mildews and dusty and powdery structures scen on leaves, stems and fruits is called powdery mildews, These symptoms can be seen in downy mildew stage of green ear disease of bajra (Sclerospora graminicola) and powdery mildew of wheat and pea (Erysiphe graminis and E. polygoni).
(ii) Smuts. The cars of cereals and grasses are sometimes turned into black or sooty masses of spores as a result of pathogenic effect. Such spores are called smut spores. smut of wheat (Ustilago segatum var. tritici) and covered smut of barley (Ustilago segatum var. honder) are suitable examples of smuts.
(iii) Rusts. Red brown, yellow and black coloured pustules with rusty appearance are formed on plants by rust fungi. Black, brown and yellow rusts of wheat (Puccinia spp.) are suitable examples of such symptoms.
(iv) Sclerotia (Sign. sclerotium)-In some fungal diseases as seen in ergot of rye and bajra (Claviceps spp.), the dormant fungal hyphae are converted into hard, compact, black and dark brown or purplish coloured structures called sclerotia.
(v)White blisters. White shining blisters like pustules are formed on cruciferous plants incited by Albugo candida. These pustules usually break open exposing powdery masses of fungal spores. This disease is also told as white rust but is quite different from true rust.
(vi) Scab. Appearance of crust like lesions on the host as observed in some diseases called scab disease. Scab of potato (Synchytrium endobioticum) is common example of scab symptoms.
(vii) Fruiting bodies. The wood rotting fungi usually develop large spore bearing structures called fruiting bodies or Sporophores.
(viii) Exudations and Gummosis. In some bacterial diseases, masses of bacteria ooze out to the surface of affected parts of the host plant. It can be seen as drops or as thin smear over the surface called exudations as observed in bacterial blight of paddy (Xanthomonas axyzae). The exudate later sets into a solid mass insoluble in water is called gummosis. Gummosis is common in cherry, peach and citrus trees.
(B) External symptoms as pathogenic effect on host plant.
External symptoms due to the effect of pathogens on the host can be further divided into following three groups namely,(a) Necrotic symptoms-which includes blights, wilts, cankers, rots and leaf spots etc.(b) Hypertrophic and atrophic symptoms which include structural malformations and (c) Miscellaneous symptoms include symptoms produced by  viruses and nematodes.
(a) Necrotic symptoms. Necrosis means death of the affected tissues, which is the diagnostic symptom of different diseases as given below :
(1) Blight. 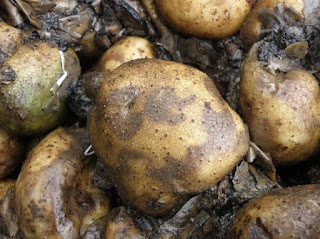 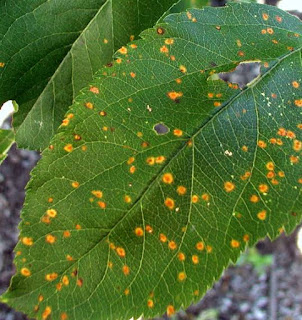 In which affected tissues die and undergo decay. Rotting may be of different kinds such as- soft rot, dry rot, and wet rot etc.
(4) Damping off. Seedlings of many plants such as chilli, tobacco, tomato and mustard etc. are prone to the damping off disease incited by Pythium and Rhizoctonia. The affected part of the stem near the ground level becomes week due to necrosis consequently the seedlings collapse.
(5) Spots and shot holes. Necrosis may be confined to small areas on leaves called dear spots. In same leaf spots the dead tissue of the sopt is sometimes shed, leaving a circular perforation called as shot holes.
(6) Die back. Dying of plant organs especially stem or branches due to necrosis from the tip backwards.
(7) Dropping of leaves, blossoms, fruits and twigs. These symptoms are seen is different diseases due to pathogenic activity or due to physiological diseases.
b) Hypertrophic and atrophic symptoms. Decrease or increase in number or in size of cells constitute diferent diagnostic abnormal structures., Hypertrophy incites overgrowth and atrophy undergrowth of the diseased plant or some of its organs.
(1) Destruction, suppression or alteration of fowers. In sugarcane smut (Ustilago scitaminae), the floral axis is transformed into a black dusty whip. In loose smut of wheat (Ustilago segatum var. tritici) the flower is destroyed and in grain smut of jowar the causal organism Sphacelotheca sorghi destroys the ovary which is replaced by the smut spores.
(2) Alterations in symmetry and habit. Under the influence of pathogen some creeping plants may become erect, leaves may became lobed and inflorescence may convert into leaf like structures.
(3) Witches broom. A compact cluster of fine slender branches may look like a broom as observed in witches broom of cherry. like structures.
(4) Phyllody. Abnormal branches may be formed alongwith stunting of plant.
(5) Galls, tumours, knots and warts. Abnormal galls, tumours, knots and warts are formed by many fungi and nematodes.
(c) Miscellaneous symptoms. Miscellaneous symptoms are seen in diseases incited by viruses, Viroids, phytoplasma mycoplasma like organisms and plasmids etc. where Necrosis, chlorosis, hypertrophy and atrophy are observed as disease complex. Important symptoms of diseases are as under :
(1) Chlorosis. Loss of chlorophyll due to pathogenic activity is called chlorosis.
(2) Etiolation. Loss of chlorophyll due to lack of sunlight resulting in yellowing of plant is called etiolation.
(3) Mosaic pattern. In virus diseases usually on leaves and sometimes on blossoms and rarely on other parts of the host, mosaic pattern characterized by irregular patches of light green, yellow or even white spots are observed. Such symptoms are recognised as mosaic.
(4) Ring spotting. Sometimes circular chlorotic areas appear on the surface of leaves called chlorotic ring spots. Usually necrosis appears in rings alternating with normal green colour of leaf. This symptoms is called necrotic ring spots.
(5) Premature defoliation. Cabbage mosaic virus causes premature defoliated ion of leaves.
(6) Yellow types. Clearing or yellowing of veins, chlorosis of lamina partially or entirely are characteristic features of yellow types.
(7) Root symptoms. In maize stunt virus the affected roots are stunted and excessively branched.
(8) Fruit, seed and pollen abnormalities. Lettuce mosaic virus causes complete abortion of lettuce seed. Tomato spotted wilt virus induces rings on tomato fruit while tomato bushy stunt virus produces necrotic spots on fruits. Pollens viability are impaired in many diseases incited by viruses.
SHARE